You are here: Home / Uncategorized / The Most Common Questions I Get Asked about LOI’s
Reading Time: 7 minutes

The day you receive your first LOI is pretty special. Regardless of whether the offer is too low or right in your ballpark, someone on the outside perceives value in the company you have spent years building. It’s basically an outside validation of your efforts that someone is actually going to give you hard, cold cash (amongst other things) for your years of effort. Of course, you may have already gotten an IOI, (see my earlier post on that), but an LOI is more serious and really gets down to the nitty gritty.

If you are NOT currently in the market, this post is still for you as you never know when an unsolicited offer may come your way, and you want to be educated and prepared for that moment.

For those of you who need a brush up on what an LOI is:

A letter of intent (LOI) is a document declaring the preliminary commitment of one party to do business with another. The letter outlines the chief terms of a prospective deal. Commonly used in major business transactions, LOIs are similar in content to term sheets. One major difference between the two is that LOIs are presented in letter formats, while term sheets are listicle in nature. The concept is similar to a head of agreement (common term in the UK), term sheet, or memorandum of understanding (MOU).

I am not going to get into what an LOI should cover (there are plenty of posts on that on the internet), but you can download a sample LOI (specific to our industry) as it might be useful to follow this post better. Be sure to read this post to the end as I talk about a must do before signing the LOI and how to approach it.

Top questions regarding the LOI from sellers (buyers pay attention too)

Ok, so you have this wonderful document in hand, but now what? All sorts of questions start popping up in your head, so I will address the most common ones here:

I am sure there are a number of other questions that may arise as part of the LOI negotiation process, but at least you are now armed with the answers to the question most sellers and buyers ask.

I am always surprised at how many sellers do not ask for “proof of funds” before they commit to an LOI. You wouldn’t commit to selling your house these days without proof of funds from the buyers, so why would you consider selling your company without one, right? Trust me, sellers are always shy to ask. If you are not being represented by a broker (and even if you are) demand proof of funds before you sign the LOI. You don’t want to head down a path of due diligence for two or three months and find out the buyer doesn’t have the money. Yep, that’s happened more than once to unbeknownst sellers.

Even as an M&A advisor, I don’t like asking for proof of funds, especially from larger buyers, but it is something I never forget to do. And it’s not just the P&L I ask for; it’s the balance sheet too. Remember the skeletons can be found on the balance sheet in the form of little cash, high receivables, high payables, or numerous outstanding loans, all of which can bankrupt a very profitable company (as it appears on the P&L). So here is my line……. “Hey guys, I need to “paper my file” so please send me over proof of funds”. Simple, easy, it’s nothing personal; just part of the process. It works every time. If someone is giving you a hassle about it, make it clear you won’t proceed with signing the LOI until it is available for review. Oh, one last tip: don’t accept just a note in an email. You want it on letterhead and signed by an authorized company representative.

Well, this certainly turned out to be a much longer post than normal, but I hope you can pull a few nuggets from here, or at least begin the process of better understanding what to expect with a Letter of Intent.Feel like you have a handle on this? Then head over to my M&A terms quiz to really test your grasp on terms.

The Good and Bad of an IOI
Next Post: Five Things Buyers Look for in an Acquisition 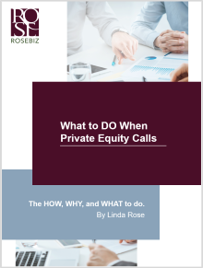